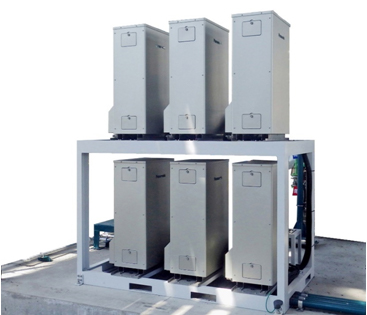 By-product hydrogen is derived from the manufacturing process of caustic soda. With the acceleration of worldwide efforts to achieve the decarbonization of society, interest in hydrogen as a next-generation source of energy has been growing. The effective utilization of by-product hydrogen is of great importance from the perspectives of not only global warming prevention and energy security, but also the chemical industry's contribution to society through the effective use of secondary products.

Tokuyama provides a stable supply of by-product hydrogen to pure hydrogen fuel cell generators. Such by-product hydrogen is generated during the manufacturing of caustic soda through brine electrolysis by an ion-exchange membrane process. Electric power generated by the demonstration equipment is used in offices in the factory, and heat generated during power generation is recovered in the form of hot water. Tokuyama has been making efforts to effectively utilize by-product hydrogen as well as build a contribution model for the local community through the use of hydrogen. This demonstration work is carried out as part of such efforts.

On the other hand, Panasonic verifies and evaluates the integrated control of the system in addition to its operating performance when by-product hydrogen is used. The on-off operation of the system's six generator units, each of which can generate 700 W of electricity, can be individually controlled. Therefore, the system allows a flexible power output setting ranging from 700 W to 4.2 kW. This is with a view to future applications, where the system's integrated control provides for major power demands. Moreover, even if one generator breaks down, the five remaining generators can continue to operate. This feature enables a generator-integrated system to continuously supply power if maintenance is sequentially performed on individual generators, thereby raising expectations for the improvement of system operational flexibility based on integrated control.

Through this demonstration work, Tokuyama and Panasonic will further advance efforts aimed at realizing a hydrogen-based society.

Note:
1. As a stationary fuel cell system, as of September 14, 2021, surveyed by Panasonic

Tokuyama Corporation was established in Tokuyama (Shunan City), Yamaguchi Prefecture, Japan in 1918 to remedy a lack of Soda Ash from overseas due to World War I. Tokuyama began producing cement, and then responded to the growth of Japan’s chemicals industry by adding a broad array of chemicals to its product lineup. The latest main business fields are ICT, in which its principal product is semiconductor‐grade polycrystalline silicon; healthcare, which includes eyeglass lens materials, dental materials and equipment, and other such products; and the environment, which includes the recycling and environment business.
Learn more about Tokuyama : https://www.tokuyama.co.jp/eng/

Panasonic Corporation is a global leader developing innovative technologies and solutions for wide-ranging applications in the consumer electronics, housing, automotive, and B2B sectors. The company, which celebrated its 100th anniversary in 2018, operates 522 subsidiaries and 69 associated companies worldwide and reported consolidated net sales of 6,698.8 billion yen for the year ended March 31, 2021. Committed to pursuing new value through collaborative innovation, the company uses its technologies to create a better life and a better world for customers.
Learn more about Panasonic : https://www.panasonic.com/global